The expression system of Leishmania tarentolae is an easy to use expression system that does not require any special conditions. The user is able to cultivate cells in biosafety level 2 conditions, at 25o-26o C in either static or stirring incubator, following given instructions.

At the Hellenic Pasteur Institute, we are able to provide plasmids for the expression of proteins in Leishmania tarentolae cells, as well as guidance for the correct cloning of genes of interest into the appropriate plasmid, for the precise transfection and characterization of Leishmania tarentolae strains and for the cell culture protocols. The service is limited only to providing experimental protocols and advices for the development of the L. tarentolae strain expressing the protein of interest. 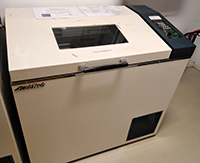 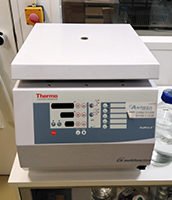 We have eight years of experience in using the Leishmania tarentolae parasite for expressing heterologous as well as homologous recombinant proteins and developing transgenic strains. Latest publication: https://doi.org/10.1016/j.bbamem.2019.07.001

Haralabia Boleti is a Principal Investigator, head of the Intracellular Parasitism Lab/Microbiology Department and co-head of the Light Microscopy Unit of the Hellenic Pasteur Institute (HPI, https://www.pasteur.gr/en/haralabia-boleti/). She has a BSc in Chemistry (1985, U. of Athens), ΜSc in Biochemistry (1990, University of Αlberta, Edmonton, Canada) and carried out her PhD thesis work (1995) in the European Molecular Biology laboratory (EMBL/ Heidelberg, Germany) obtaining her PhD degree from the University of Heidelberg. She was a post-doctoral fellow at ΕMBL (1995-1996) and at the Institut Pasteur in Paris (1996-1999) in the laboratory “Βiologie des Interactions Cellulaires”. She returned in Greece in 2000 with a Mobility grant of the International Network of Pasteur Institutes and since 2002 she holds a researcher’s position in the Department of Microbiology of HPI. Her research interests focus on aspects of the molecular Cellular Biology of the Intracelllular Protozoan parasite Leishmania donovani (L. donovani), and its interaction with the mammalian host macrophages. Her goal is to contribute to the understanding of molecular mechanisms characterizing the initial stages of the infection and the identification and characterization of candidate putative drug targets for the development of anti-leishmanial drugs. Also, her team works on biotechnological applications of the organism Leishmania tarentolae (non human pathogen Leishmania species) for the expression and production of recombinant eukaryotic proteins, as an in vitro system for the testing of anti-leishmanial substances.