The laboratory of Bacteriology at HPI offers biochemical characterization of enzymes through steady state kinetic analyses and measurement of inhibition constants by monitoring initial reaction velocities at various conditions through spectrophotometry. Among the services offered are functional analyses through kinetic studies of novel clinically relevant beta-lactamases (full substrate spectra) as well as evaluation of the inhibitory potential of novel compounds against these enzymes. 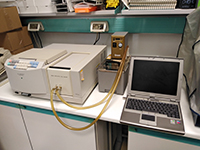 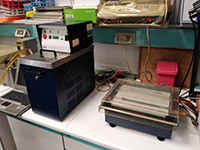 Dr Vivi Miriagou was born in 1964, Athens Greece. VM is currently senior researcher in the Laboratory of Bacteriology at the Hellenic Pasteur Institute. She has received her Bsc (Biology) in 1987 from the National & Kapodistrian University of Athens. She has received her PhD in Microbiology in 1997 from the Aristotelian University of Thessaloniki. In 2001 she joined the Laboratory of Bacteriology of the Hellenic Pasteur Institute and since 2006 she has been appointed researcher in the same laboratory. She participates in the research projects of the laboratory on Bacterial Antibiotic Resistance and is responsible for the activities on the genetics of resistance to newer -lactams. Her main research interests are (a) the biochemical and molecular characterization of determinants encoding for beta-lactamases, enzymes that hydrolyze the beta-lactam antibiotics, (b) the delineation of the enzymatic mechanism of hydrolysis of beta-lactam antibiotics by beta-lactamases, (c) the investigation of the expression, mobilization and clustering of resistance determinants, and (d) the characterization of genetic units, such as mutli-resistant plasmids, carrying resistance genes. Also modeling of resistance enzymes and complexes with the respective antibiotics has been introduced in the laboratory under her supervision. She has 109 publications in peer-reviewed international journals (including 4 reviews and one editorial), she is currently on the Editorial Board of two international scientific journals, and has reviewed for an additional 9 journals, and since 2010 she is appointed to work with ECDC as Disease Expert - Laboratory for Greece, in the ECDC-Network for Antimicrobial Resistance-AMR.